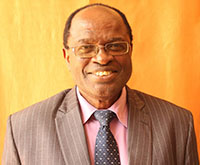 Prof Samuel Gudu has experience in University administration spanning over twenty-five years, part of which as Vice-Chancellor, Deputy Vice-Chancellor; Principal of University College, Director of Research, Ag Dean, and Head of Department at University level.

He is a full Professor of Genetics and Plant Breeding. He earned his PhD degree in Plant Genetics & Molecular Biology from University of Guelph, Ontario, Canada; M.Sc. (Genetics & Plant Breeding) and B.Sc. Hons. (Agriculture) from the University of Nairobi. Prof. Gudu has taught for many years in University and supervised and graduated many students at Master and PhD levels.

Prof. Gudu has received many honours and awards including: Elder of Burning Spear (EBS) a commendation by the Head of State; Research Leadership by the American Bibliographic Institute (ABI) and the Association for Strengthening Agricultural Research in Eastern and Central Africa (ASARECA). He is a member of American Society of Plant Biologists (ASPB), and International Association of Plant and Soil Interaction at Low pH (PSILPH) and Board member of Kenya National Innovation Agency (KENIA). He was also a member of Taskforce appointed by the Minister of Health in Kenya to give technical paper on the impact of Genetically Modified Organisms (GMOs) of food and food safety, health and environment.

effect of soil acidity on maize, sorghum and grain legumes productivity and has developed varieties and germplasm tolerant to soil acidity and various constraints including drought and diseases; and

PI of a project titled “Enhancing livelihoods of smallholder farmers in Western and Eastern Kenya through Agro-ecological intensification with sorghum-based interventions” funded by McKnight Foundation, USA,

Prof. Gudu has published widely in Refereed Journals, technical reports, chapters in books and presented many papers in Scientific Conferences. A sample of his recent publications are listed below: